This is an interim report on the results of Sylvan Lake  water quality sampling between May and September 2016. Previous posts have illustrated the joint SLWSS-ALMS project in action on the high seas. The teamwork of ALMS lake technician Breda Muldoon, able crew members from the SLWSS, and boat captain Ed Thiessen of Norglenwold allowed us to complete three of the planned five sampling cruises. Two were abandoned because of unsafe weather conditions.

The official LakeWatch report on the Sylvan Lake 2016 campaign will be issued by the Alberta Lake Management Society in mid-2017 according to the standards and schedule of that program.

Meanwhile, some of the raw data analyzed by Maxxam, the certified commercial laboratory in Edmonton, are available for inspection and preliminary interpretation. This table summarizes the constituents in Sylvan Lake water. The list includes naturally occurring cations and anions that are transported from the land into the lake over time in groundwater, precipitation and atmospheric fallout. In addition, the indicator nutrients nitrogen and phosphorus are measured to determine the eutrophic condition of the lake.

We were surprised to discover that the Total Phosphorus (TP) concentrations fell at the low end of the historical range on this histogram of data from three decades of water quality analyses: 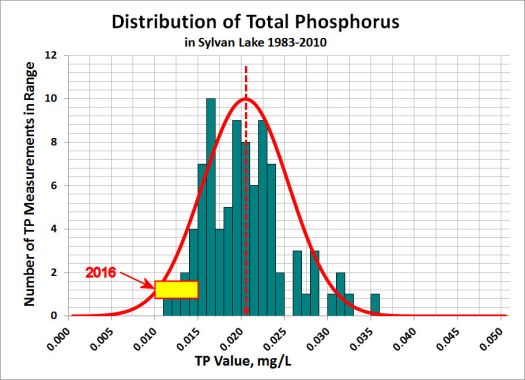 Those TP values in the range 0.010 to 0.015 milligrams per litre (that is, ten to fifteen parts per billion) were well below the eutrophic limit threshold guideline for Sylvan Lake of 0.035 mg/L, or 35 ppb. Note that the historic TP median concentration has been about0.021 milligrams per litre, or 21 ppb. That is the source concentration of phytoplankton fertilizer feed.

We use TP as an indicator or quick index to estimate the potential for phytoplankton growth and appearance of algal blooms that are common at other nutrient-rich Alberta lakes like Pigeon and Pine lakes.

The 2016 data suggested that the food chain in the lake might be adversely affected by too little nutrient content. If single-celled phytoplankton don’t grow, and produce food for zooplankton and the higher members of the food chain then aquatic health of the fish stock can become jeopardized by being placed on a low-calorie diet.

We observed that directly with the simple Secchi disk test for water clarity. Through the sampling period, the disk typically remained visible down to a depth of 5 metres, indicating that there was not much light-scattering suspended material in the water column.

Part of the explanation for the depleted nutrient concentration in 2016 undoubtedly was the absence of significant snowmelt runoff until mid-May. Generally initial runoff carries high concentrations of nutrients into the lake. After plants start growing on the land those nutrients are captured and retained and become less available to reach the lake. Here is the precipitation history for the January-September period using Alberta Agriculture data from the Hespero weather station west of the watershed. 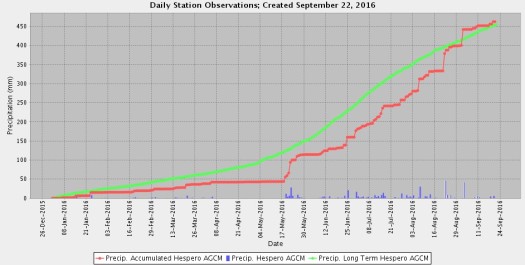 Intermittent soil-saturating precipitation of >10 mm/day (the tiny blue spikes) tends to activate surface flow into tributaries and creeks that discharge into the lake. The red cumulative precipitation line did not cross the long-term average until September, after which nutrient concentrations do not contribute to concerns about excess cosmetic algal growth.

A customized addition to the 2016 campaign was the collection of water samples from within the top 1 metre and the bottom 1 metre of the lake at its deepest sample station. The purpose was to detect any elevated TP concentration above the sediment from decay of nutrient-rich material previously settled out of the water column. Previous studies of Sylvan Lake have demonstrated that enriched layer. However, our chemical analyses in combination with the relatively constant instrumental measurements with depth of conductivity, temperature and dissolved oxygen suggested that the chance of substantial nutrient mixing was low through the open water period of 2016. That conclusion assumes that conditions at other deep locations above the lake sediment are no worse that what we observed at the reference station.