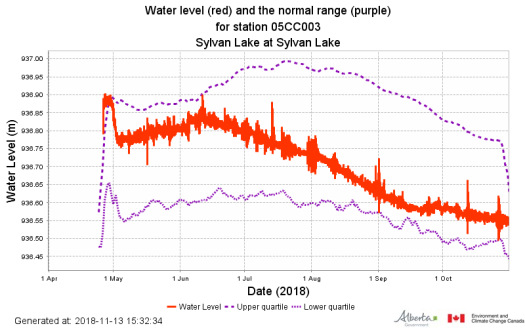 This graph shows the lake level data measured continuously by Environment Canada after May 1. 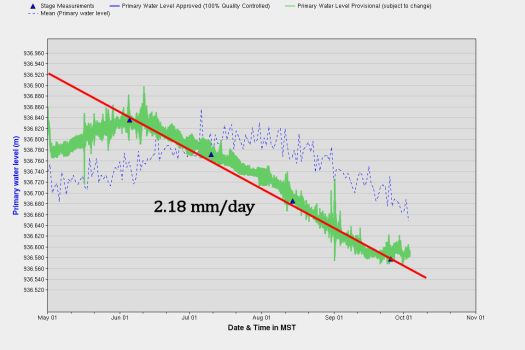 Without significant precipitation and tributary discharge from watershed land into the lake through the summer months, about 10.92 million tonnes of water disappeared by evaporation from the lake surface. That is why the lake level dropped by about 0.26 metre after June 1. Now that that the lake water is cooling, the density increases and the volume will further decrease until freeze-up. Water loss by evaporation decreases as the lake temperature drops.

Historically, evaporation dominates after July 1 so 2018 saw an extra early month of water loss. Here is an example from 2000:

Will the lake level rebound in 2019? Probably not. The Sylvan Lake watershed typically receives about 0.5 metres (500 mm) of precipitation annually. Most of that is lost by evaporation and transpiration off the lake surface and land. Annual precipitation levels are not well correlated. That means rainfall in a next year does not depend on rainfall in a current year. Here is the evidence: