Lake users are chillier than usual this year. How can you tell?

Open water lake temperatures are not monitored regularly. Data are only collected by ALMS lake technicians when the water quality is sampled during campaigns about every second year. This article uses a full set of data from  Alberta Environment archives from 1996 that were published in the report “Sylvan Lake Water Quality Study-AXYS Environmental-2005-Appendix A” When combined with air temperature data recorded at the Red Deer Airport and reported by Environment Canada for the same period, here are the air/lake values from that summer: 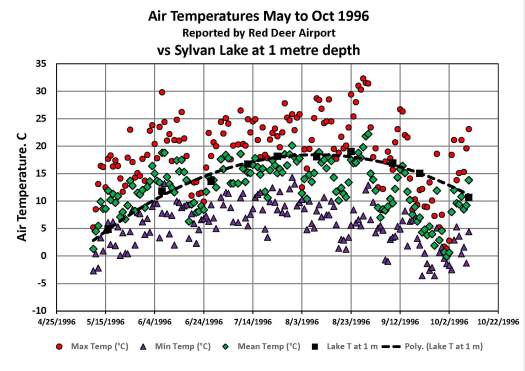 The lake temperature data (the black dots and dashed line) are digitized from the following vertical temperature profiles logged at the AEP deep water station used for water quality monitoring in 1996: 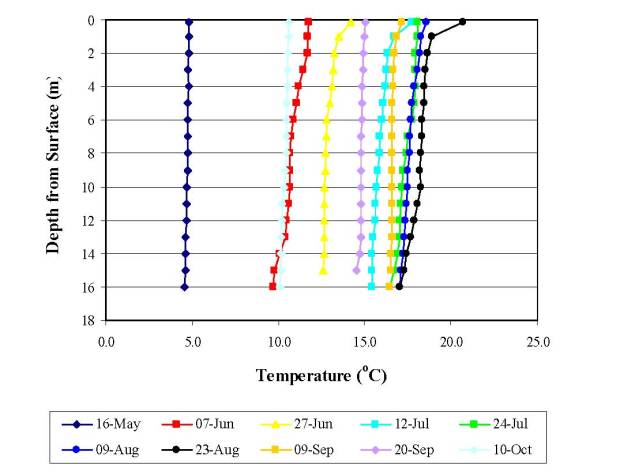 Note that the temperature down the whole 16 m water column is quite constant. The heating of the top 1 metre layer detected on Aug 23 was caused by contact with 30 C air in the preceding days.

The first figure confirms that lake heating can only occur when the daily high temperature exceeds that of the lake water. Median and Low daily temperatures are generally too low to heat the lake except in the May-June period.

The temperature behavior of the air/lake system is controlled by the incoming solar radiation, the boundary layer air temperature, and the temperature dependence of the density water which is at its maximum at  about 4 deg Celsius. See the next graph. That’s why ice floats on water. In general, a warmer surface layer will not sink unless there are waves to mix it, but a cooler layer will. 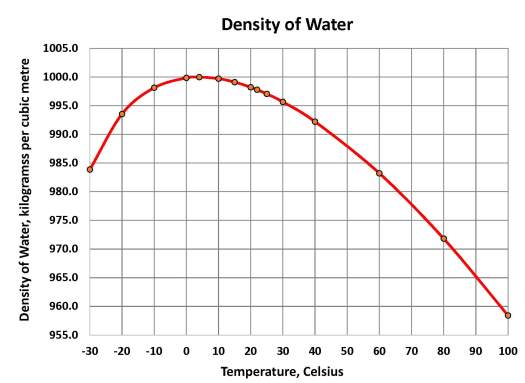 Every day is not a beach-swimming day at Sylvan Lake, unless you are a fish. Read about what happens in winter.

That’s water science. It’s what we do.