How much precipitation has fallen on the watershed in 2015? Has is been lower, higher or about average?

The answer, according to data from Alberta Agriculture’s Hespero weather station west of Sylvan Lake we have received just about the typical historical amount. This graph shows the 2015 cumulative precipitation (red) compared to the average curves for the Hespero (blue) and Red Deer Airport (yellow) weather stations. Click to enlarge the figure:

Because of the wide range of precipitation at points on the ground the 2015 curve is just representative. In Alberta, incident rain can very significantly within short distances. Still, over time it averages out. We will continue to use the Hespero station as our reference as it is generally upwind of the watershed and cloud systems tend to blow in from the west. The Alberta Agriculture database does not report annual accumulated precipitation for the Lacombe Airport.

What do the data mean? We have received a little more than 35 cm of precipitation since the beginning of the year.

If we only look at the data since May 1:

rain has fallen intermittently with lengthy dry periods in between. Those 20-30 mm rains have caused excitement and they have tested the Town of Sylvan Lake’s stormwater system. The strip-mined areas of town, the land under development at the south end, have been susceptible to erosion and runoff that has caused Golf Course Creek to become turbid as reported in a separate post.

Once solids become suspended in a flowing or turbulent water body there are two solutions to restore water clarity:

(1) Slow down the flow and allow the particles to settle according to Stokes’ Law. Heavier coarse particles settle rapidly. Very fine ones like clays can take decades. Stormwater detention ponds are supposed to provide extra settling time just like tailings ponds do at mining operations.

(2) Apply separations technologies like thickeners, cyclones, centrifuges and filters to speed up the separation. Non toxic flocculants can be added to increase particle size by agglomeration and to increase the Stokes’ Law settling rate.

Of course if eroded particles are prevented from entering the stormwater system at the source then Sylvan Lake’s water will remain clear as an elementary school student reminded us: 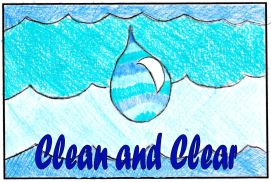 Contaminating water bodies can be a serious offense under Alberta’s Water Act. The best practice is not to let it happen.